Just to let you all know, the team have departed Tanzania safely. They had a wonderful final morning exploring a craft market before relaxing at a lodge near the airport. All went smoothly onto their respective flights, although there was one temporarily misplaced passport!
The leaders would like to say a huge thank you to the whole team for being such great fun, and extremely hard workers.
All the best,
Inspire Worldwide
www.inspire-Worldwide.com
Posted by Inspire Worldwide at 14:06 2 comments:

A quick photo from the team! They are having a great safari in Tarangire and Ngorongoro Crater...
Tomorrow they will be heading homeward! 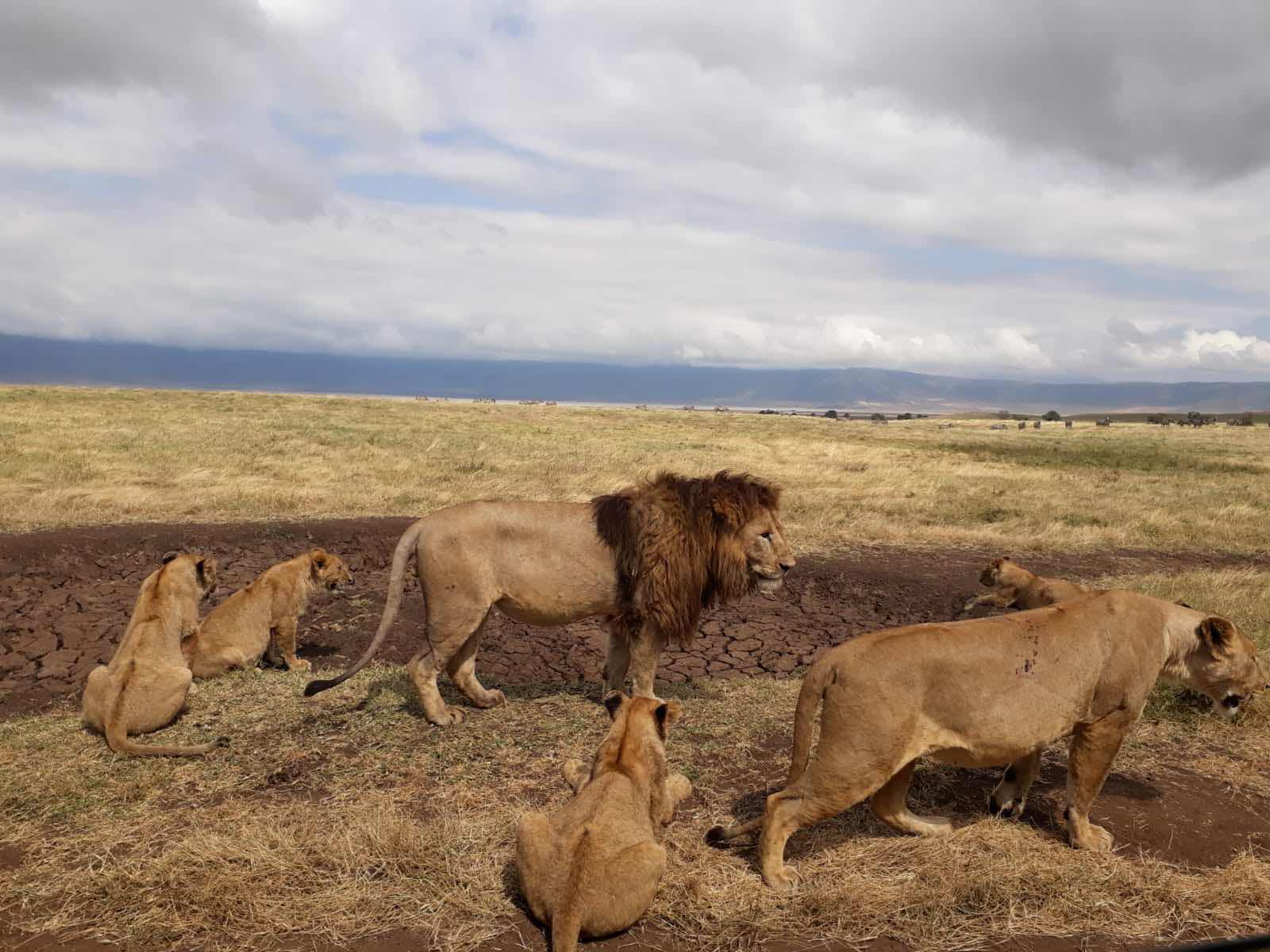 Posted by Inspire Worldwide at 15:25 2 comments:

Blog from Claudia:
When I came to Tanzania I already knew that I would be working on the landscaping of Bacho  Primary School. I tried to prepare myself ahead of time learning about the local native plants and vegetation but no literature that could help me was available.
Lucky me that a teacher (Mr Nemes) from school was very knowlagable bout plants and had already some ideas of what he wanted for the school landscaping. We walked around the school ground exchanging ideas and that's how the landscaping came out to be.
On Monday I started the project with the most dedicated and hard working group of volunteers, digging, carrying bricks, paving, cleaning... We also had help from members of the community and even students from the school. The enthusiasm and team work was fantastic and the work pregressed faster than I had planned.
Despite all the help, every evening we were sore and exhausted.By Friday we had achieved more than I had planned in the beginning. I was exhilariated and very proud of all volunteers who had worked so hard the whole week.
On Friday afternoon we had a celebration with a member of the government and Karimu took this opportunity to officially inaugurate the school. The best was that the event took place in the most wonderful location ever: our brand new and beautiful landscaped garden!
Dear volunteers,  thank you so much for making this possible!
Today is the team’s last day in Bacho... tomorrow the safari awaits. 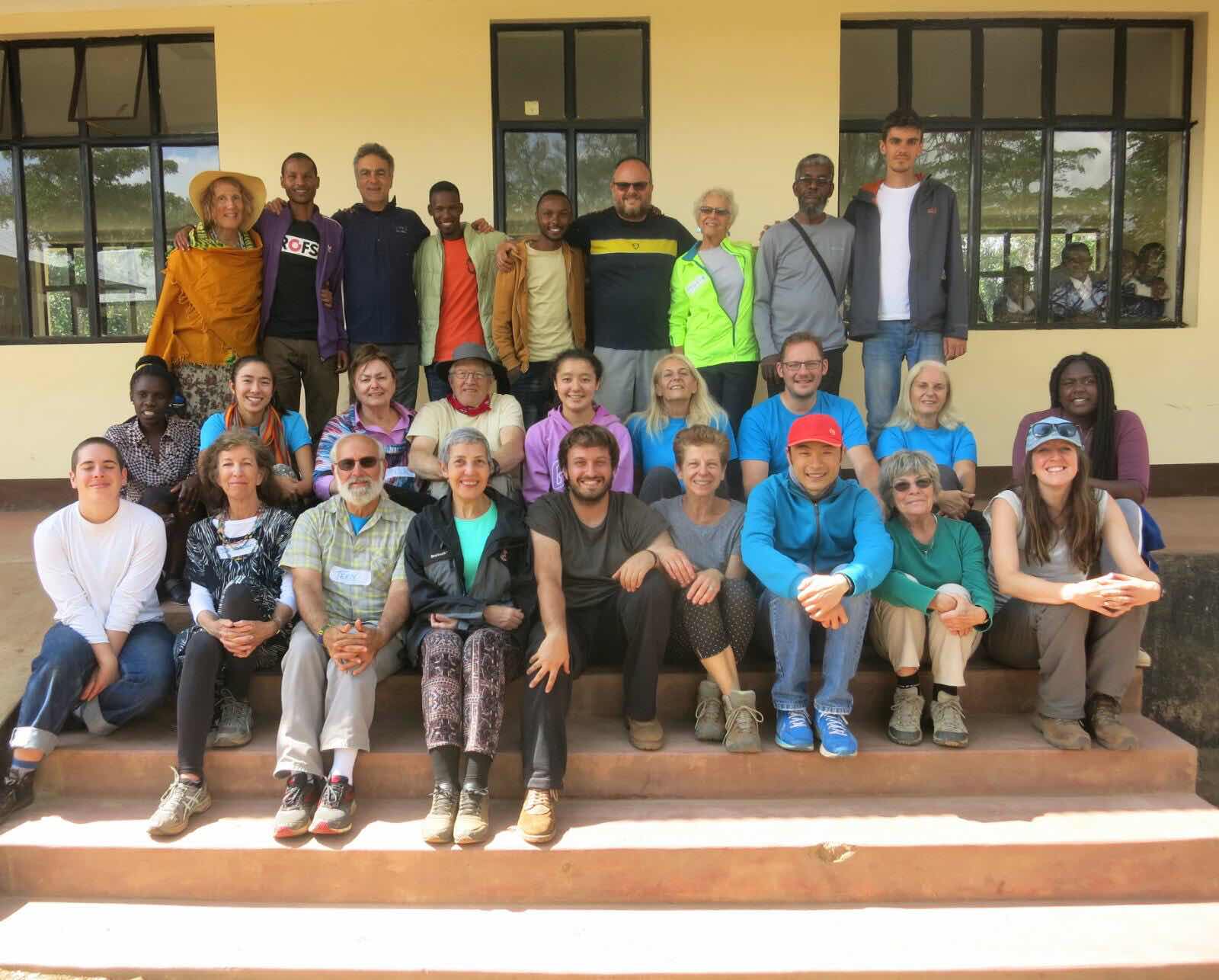 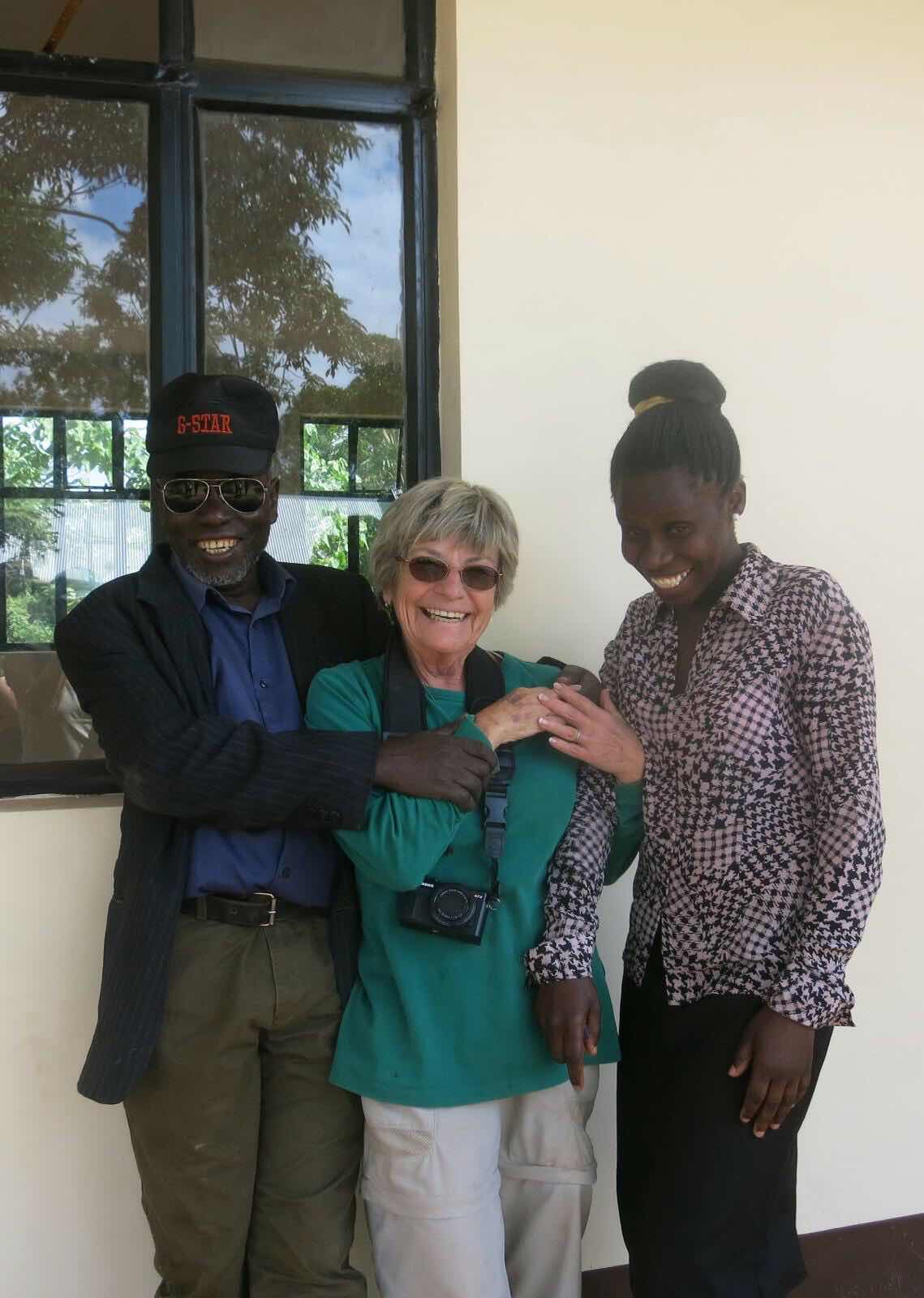 Posted by Inspire Worldwide at 14:19 3 comments:

Rhythm + Poetry = Music
Yesterday morning was not only an  experience of artistic fusion but also an interesting journey across language barriers. It had always been in the itinerary for Marshall and Marriane to teach a class to the Secondary School students that had something to do with music. Although this was a solidified plan of action there were no preconceived ideas of what would be taught in the class, and in the wise words of Marshall we decided to go with no expectations.
After all, in the world of jazz; Marshall's particular musical medium, improvisation is at the epicenter. Marriane translated a Swahili poem to English and Marshall came up with a tune to go with it. And we went into the classroom with just that. It was already apparent to us just how enthusiastic the students were and their natural inclination to music.
We started off by having the students read both the Swahili and English versions of the poem aloud. Then the tune Marshall had come up with was played on the ukulele.
It didnt take long for the students to start singing the poem in both Swahili and English and tweaking it where they saw fit to accompany the tune. We let the dynamic of the class flow freely and soon they were writing their own powerful lyrics in both Swahili and English.
After creating their own lyrics they separated into three groups and each created their own tune to go with the lyrics and drum rhythms. It was very intriguing to listen to the very different styles each group came up with. Some had a choral and angelic feel to it while the others were quite upbeat and dance inspiring. Nevertheless, by the end of the class three distinctive songs had been created by the students.
It was truly a successful display of talent in both the students musical abilities and Marshall and Marrianes teaching abilities.
Priyanka 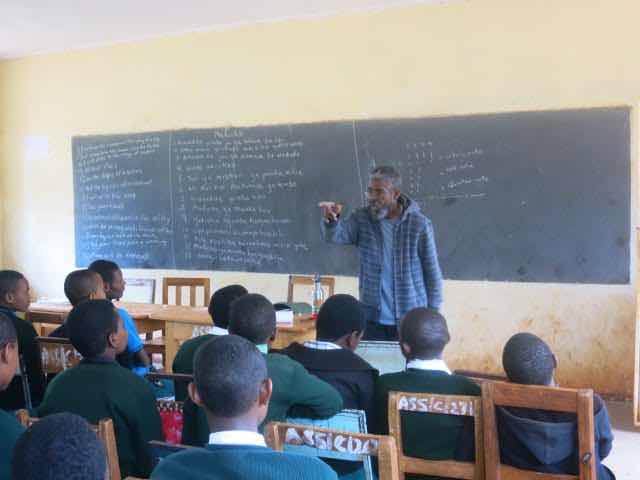 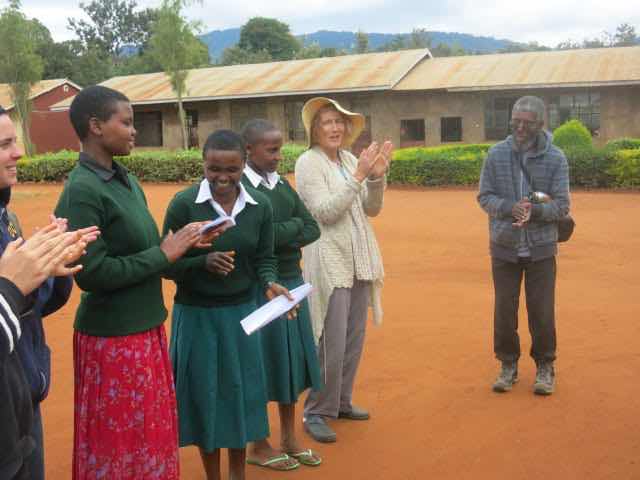 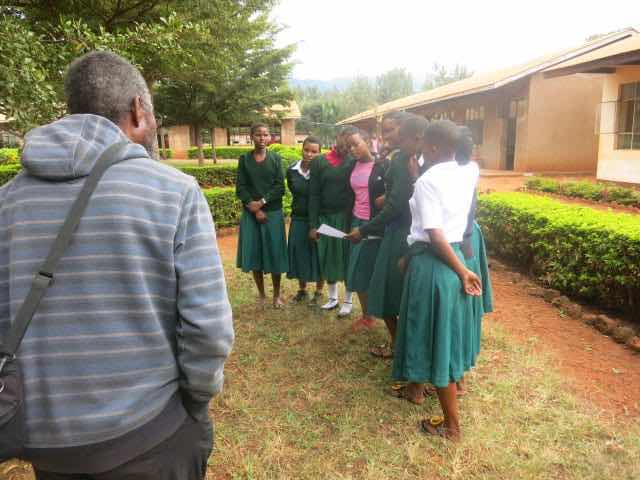 Blog by Feinila:
Over the course of the past few days the Karimu team has been working tirelessly at Bacho primary school. There is rarely an occasion where a project like ours is able to follow through with a project to completion.
Bacho primary school is one of those rare cases. The task was to landscape the school and make it more visually appealing; polish the rough edges, if you will. We separated the collective group into two distinctive teams; Team Lump and Team Dump.
If you've ever worked on a building site, you might already get the idea.Team Dump gathered and dumped materials in designated spaces, while Team Lump shaped those materials together to create structure.
Our Team Lump s leader got sick, but she still reminded us to finish the structure today. One of those structures being the stage which is looking quite good at this point! 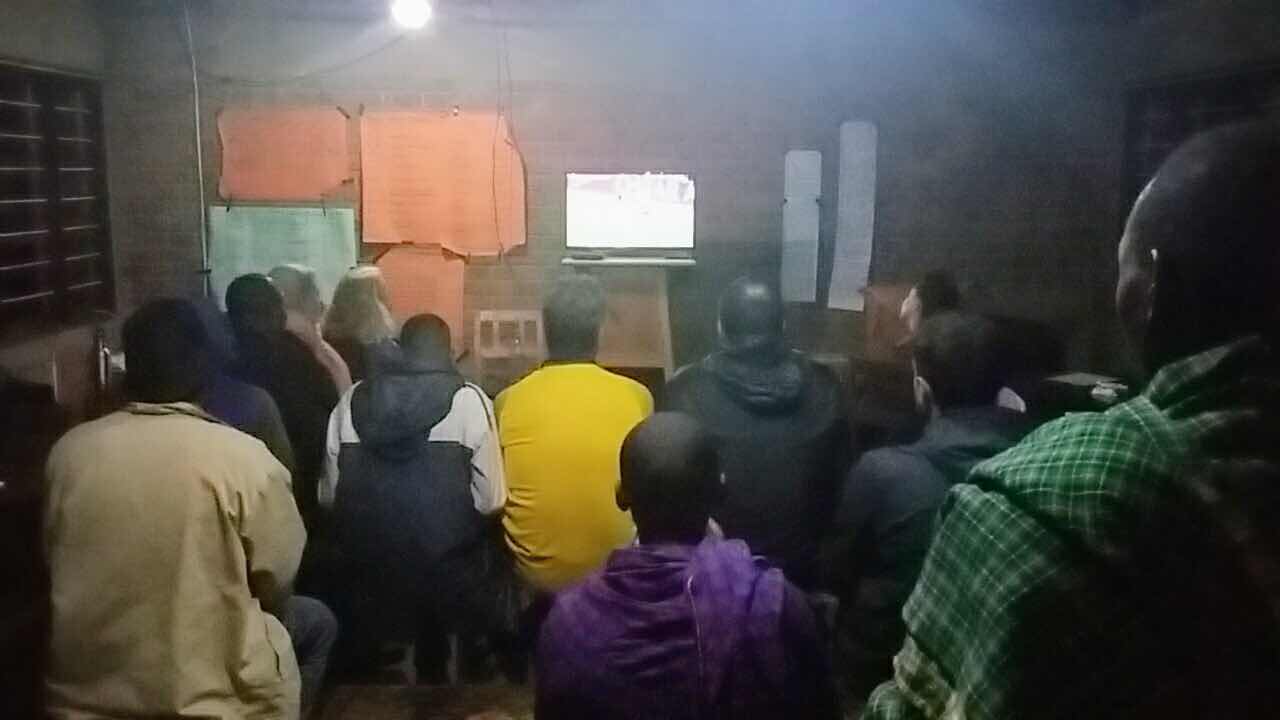 Hello! I'm Patricia, from Argentina. It is a unique experience, living with the community here, working on several very good and important projects for the whole community. The landscape is incredible, with fully cultivated valleys and hills. The local people are very friendly, especially the children. A big hug from Tanzania, Patricia.

Hello everyone! I am Monica from Argentina. I am having an incredible experience here in Tanzania working for the community and I am always surrounded by happy faces. Amazing eyes and radiant smiles crossing farmed fields and breathtaking landscapes. I am happy to have decided to do it, the people here are grateful, kind and always smiling and entertaining. Greetings from Tanzania, Monica. 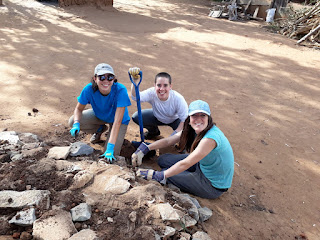 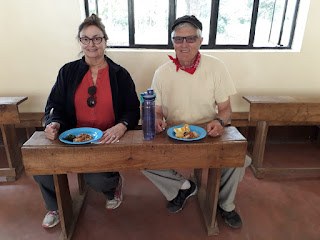 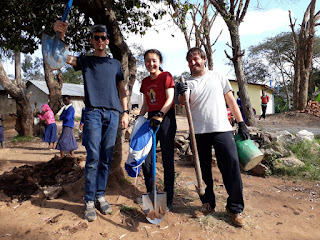 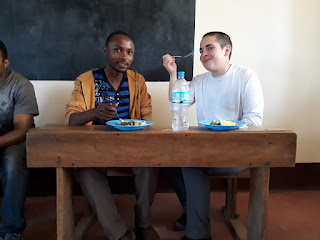 Posted by Inspire Worldwide at 12:26 5 comments:

Day 5 Blog by Priyanka:
Over the course of this trip we have often been the guests; welcomed warmly by the locals and treated as cherished visitors.Yesterday night was the first instance in which the tables turned. The maasai traveled about 7 hours to come and meet us, and upon arrival it was clear that we were the ones welcoming them to the Institute after their long journey.
"Karibuni", we said not realizing that they spoke little swahili and instead the Maasai language, mars. They took their rest, sitting on the benches as we studied their intricate adornments.
The men wore red and black patterned cloth while the women wore blue and black patterned cloth. The men carried staffs seemingly made of animal hide and whips with straight black hair trailing out of it. All of their ears were dripping with glittering silver and beaded jewellery. The men wore arm cuffs with silver chains and coins connected by white beads.The women each had one or two circle plates of beaded jewelry that cuffed the neck. The women also wore cylindrical hats of the same beaded material.
Once they rose to perform their traditional dances for us, it became clear the usefulness of their beautiful jewelry. The women shook their shoulders up and down, creating a flurried motion with their neck jewelry. In addition to the motion, a wonderful sound was created from the beads clinking against each other. The mens arm cuffs also created a similar sound as they clasped their hands and jumped up and down.
The men made guttural chanting noises to add to the womens high pitched singing. It was truly a cacophony of tribal sound and rhythm. Soon enough they brought us into the circle of dancing and music and we joined them.
Our maasai translator, Mr. Torrongei, explained what they were singing about. The first few songs were an introduction of each age class. And towards the end they sang songs which were the traditional preface to male circumcision; in their culture, the transition from boyhood to adulthood. Truly a stark comparison the the western idea of coming of age.
After a couple hours of singing and dancing we went to the dining hall to eat dinner. The maasai sitting side by side with us. The kitchen staff had cooked up a hearty meal for our guests. After dinner our translator enabled us to ask quesions and we had a table discussion and an exchange of culture.
Meeting with the Maasai was quite a mutually wonderful experience. 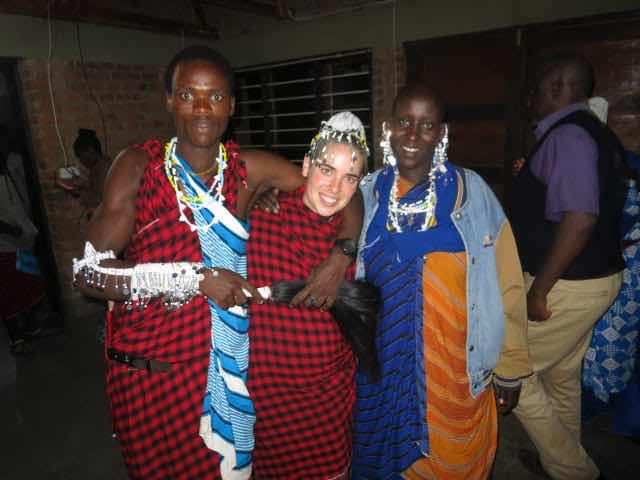 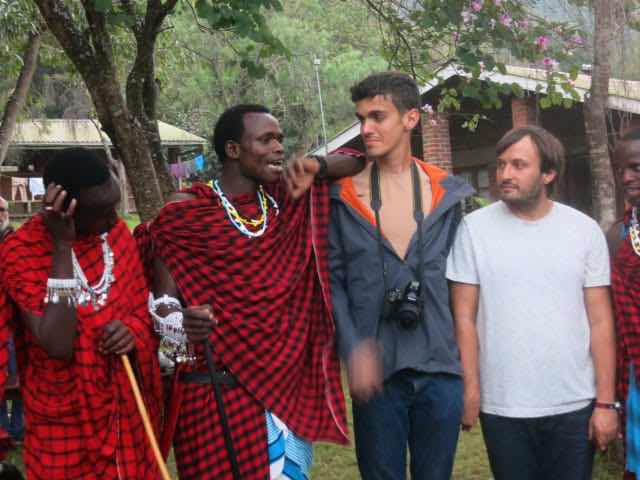 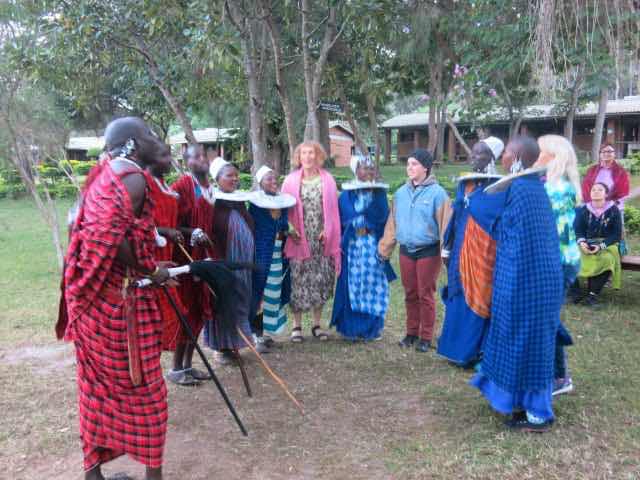 Day 6 Blog from Julie:
Teaching Art Classes is Ayalagaya
So far we have given two art classes, one in Gajal and Haysam. This week we will be giving three more classes.
What an incredible experience as you walk into the classrooms filled with 90-100 children from the ages of 5 to 12.
We are so amazed by the numbers, but most of all we can't believe how very quiet and respectful they are of their teachers and classmates.
We are so pleased to see how appreciative the children are of the projects we have brought to them. The children take their time and are so engrossed in all they create.
They love to to draw the items we demonstrate, mostly animals, on the blackboards. They often miss recess so they can finish up their drawings.
As we finish up the art classes we are thanked over and over again by the children's wide smiles and goodbyes. 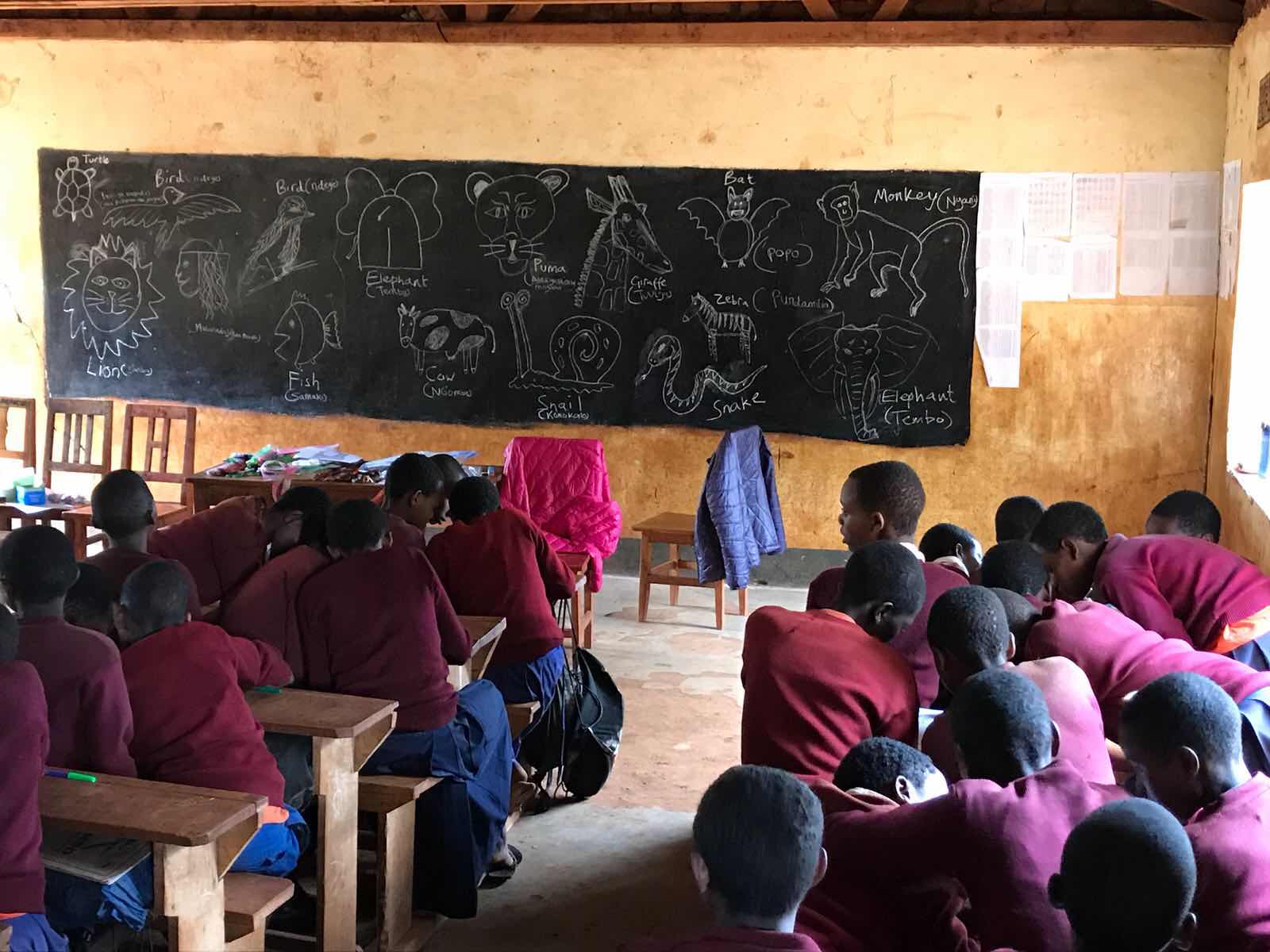 Posted by Inspire Worldwide at 16:48 5 comments: